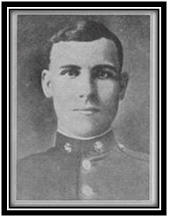 Leo Thomas Leyden, the first Denver man to be killed in action, was born in Denver and lived here most of his life. He was educated in the public schools and in the Denver University.

He enlisted in the Marine Corps on July 1, 1917 and took his training at Mare Island, California. He was transferred to Quautico, Virginia in November, 1917. He was assigned to the 17th Company, 5th Regiment, U.S.M.C. On December 27th he had his first experience with the Hun, when an attempt was made to torpedo the ship, but instead, the sub was destroyed. It was the same day that he arrived in France.

He saw action near Verdun early in the spring of 1918 where he was gassed. At the height of the German drive on Paris he was sent to the Chateau-Thierry Sector, where he helped repulse the German drive on Paris. Robert Graf, one of the members of this Post was in the same Company with Leo. On June 6th, Bob was lying in an advanced, exposed position, seriously wounded. Leyden, a runner for the platoon, came across Graf and, without regard for himself threw his wounded Denver buddy over his shoulder and carried him over 500 yards through a heavy shell fire, to a dressing station. On the morning of June 15th Leo was in a dugout, awaiting orders to go on outpost duty when a large shell made a direct hit on the dugout, killing him. He was buried near Lucy and later his body was returned to Denver, where his remains were interred in Mount Olivet Cemetery.