John Hunter Wickersham was born in Brooklyn, N. Y., Feb. 3, 1890. He came to Denver when a small boy and received his education in Denver.

He went to the First Officers Training Camp at Fort Riley, Kansas in May, 1917. He was commissioned a Second Lieutenant and assigned to Company H, 353rd Infantry 89th Division. Lt. Wickersham, was killed while leading his platoon on Sept. 12, 1918. For his heroism during the engagement in which he met his death. Lt. Wickersham was awarded posthumously the Congressional Medal of Honor. General Pershing included Wickersham’s conduct as one of the hundred most heroic acts of the War. His body now rests in the American Cemetery, Thiaucourt, France. A present day picture of the St Mihiel Cemetery is available on the The American Battle Monuments Commission website.

The citation reads as follows: For conspicuous gallantry and intrepidty above and beyond the call of duty in action with the enemy near Limey, France, Sept. 12, 1918. Advancing with his platoon during the St Mihiel offensive, Lt. Wickersham was severely wounded in four places by the bursting of a high explosive shell. Before receiving any aid for himself, he dressed the wound of his orderly, who was wounded at the same time. He then ordered and accompanied the further advance of his platoon, although weakened by the loss of blood. His right hand and arm being disabled by wounds, he continued to fire his revolver and with his left hand until exhausted by the loss of blood. He fell and died from his wounds before aid could be administered. 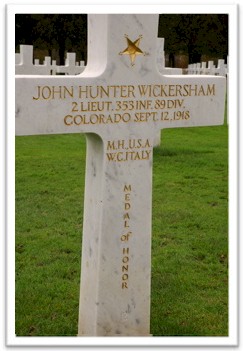 "The Raindrops on Your Old Tin Hat"

The poem he wrote to his mother the day before he died reads as follows:

The mist hangs low and quiet on a ragged line of hills,
There’s a whispering of wind across the flat,
You’d be feeling kind of lonesome if it wasn’t for one thing—
The patter of the raindrops on your old tin hat.

An’ you can’t help a-figuring—sitting there alone—
About this war and hero stuff and that,
And you wonder if they haven’t sort of got things twisted up,
While the rain keeps up its patter on your old tin hat.

When you step off with the outfit to do your little bit
You’re simply doing what you’re s’posed to do—
And you don’t take time to figure what you gain or lose—
It’s the spirit of the game that brings you through.

But back at home she’s waiting, writing cheerful little notes,
And every night she offers up a prayer
And just keeps on a-hoping that her soldier boy is safe—
The Mother of the boy who’s over there.

And, fellows, she’s the hero of this great, big ugly war,
And her prayer is on the wind across the flat,
And don’t you reckon maybe it’s her tears, and not the rain,
That’s keeping up the patter on your old tin hat?

“The Raindrops on Your Old Tin Hat” by J. Hunter Wickersham